What Is Rapid Prototyping?

Prototyping has become an essential part of any design and development process for every company. Traditionally, to create a prototype, you needed to code your work, which required nearly the same cost and effort as the final product. Nowadays, designers can cut costs and save time by quickly creating prototypes that resemble the next screens of a website or application by rapid prototyping.

In this article, we’ll discuss the importance of rapid prototyping and different techniques that you can take to speed up your design process.

So, what exactly is rapid prototyping?

Before you invest a lot of time and money into developing an idea or product, you’ll want to know that it’s user-friendly and prototypes can help with this. They can range from hand-drawn sketches (low fidelity) to interactive mockups (high fidelity) that look and feel like the finished product.

The purpose of rapid prototyping is to demonstrate possibilities quickly by building a series of inexpensive mock-ups so that you’re able to get early feedback and adjust designs accordingly.

“In a recent report, IBM found that discovering errors after releasing software costs 30 times morethan catching them at the design stage.”

This process will be quicker and cheaper than creating a full-blown and fully functional version of your idea. Prototyping helps individuals and teams quickly experiment with multiple ideas; facilitating discussion through visuals rather than words and ensures that everyone is on the same page.

What are the benefits of rapid prototyping?

There are many advantages of rapid prototyping over other design approaches:

How to choose your rapid prototyping tool

When it comes to creating prototypes, there are many tools and methods out there that make choosing one no simple task. Every few weeks a new prototyping app would be released, and it’s hard to give them a proper try without essential resources like time.

You might not find one tool that does everything, but prototyping tools should help you move through your process smoothly, especially when you are under tight deadlines. Here are a few objectives that could help you narrow down your search for that perfect tool.

How to build a prototype?

The beauty of this process is that it’s really quite simple and hugely beneficial.

The quickest way to start is also the easiest and that’s by sketching with pen and paper. Paper prototypes are very simple to create, ranging from rough sketches to storyboarding and allow you to check that your concept and requirements have been fully understood without investing too much time.

Paper prototyping is often done in the very early stages of a design process, particularly during a brainstorm or conceptual session with the client to understand their brief. Low fidelity prototyping has very little to no learning curve and allows you to make changes quickly and easily.

Medium fidelity: Jump on the computer As you start using software to prototype, the fidelity increases to create medium fidelity prototypes. Anything created at this level will take a little more time and effort but the look and feel of the product will become more refined and formal.

Most designers will use this stage to focus on showing off the user journey of the application, but visual elements of branding, colour, and style can be also introduced here. Interactivity can be imitated by linking pages or screens together. This type of prototype is best suited to test whether users’ needs are met and optimised as possible. It’s best to save any templates or reusable elements to reduce the time spent on this stage and as you become more proficient with your choice of tool this part of the process will get faster!

High fidelity: Time to get interactive 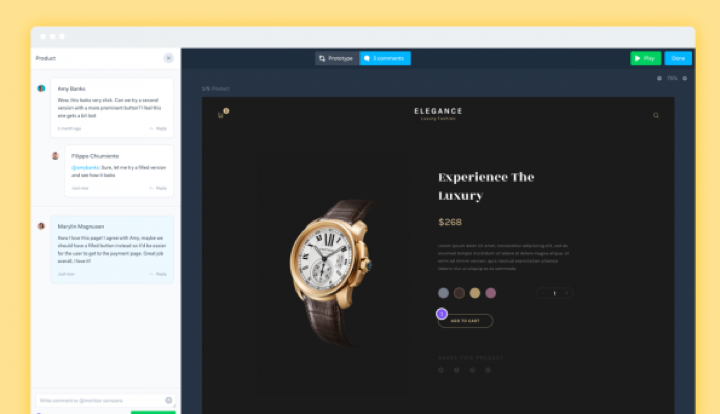 High fidelity prototypes are the most realistic and could be mistaken for the final product. These are usually built to test on real devices and often used for usability testing with real users. Nowadays, there are apps that allow both designers and non-designers to create visually rich and powerful prototypes with drag-and-drop UI components, creating realistic user experiences by simulating the functionality of the final product.

You’ve got a good idea about different things to look out for in a prototyping tool and an understanding of the different levels of prototyping fidelity. Here are a few best practices aka the do’s and don’ts of rapid prototyping.

Tips for getting started:

Rapid prototyping can be used at any stage of the product development cycle. It’s the most effective early in the process, allowing designs to evolve more efficiently. This process is also one of the best strategies for developing successful digital products, for any size company. Remember that the more prototypes you create and share, the better your product and solution will be.

What To Look for in Remote Usability Testing Tools

The Ultimate Guide to Prototyping

How to Run Your First Design Thinking Workshop Using Marvel

How To Test UX Design Early On In Your Process

Research
What is Usability Testing?

The ultimate guide to usability testing, learn how to uncover problems and opportunities in design when testing.

Read more
Research
Should User Researchers Give Feedback to Teams?

The other day, I saw a bad prototype. It came up during a design critique. We were going to start user testing that very prototype the next day. I wrote down my notes and mentioned it to the designer. The problems I saw were: Typos. Simple design flaws (different colors for the same hierarchical information). Information that made no sense… Read More ￫